It’s fairly safe to assume that without Iola Theatr Bara Caws would not exist, and without Bara Caws the theatrical landscape in Wales would be quite different.

Some of the present members of the Company worked alongside her for years on memorable productions such as Bargen and Bynsan Binc, but as for me, I first saw the original Bara Caws performing a show called Hwyliau’n Codi when I was in a young student in Aberystwyth University at the tail end of the ‘70s.  My eyes were opened to the truly exciting possibilities of Welsh language theatre, with Iola’s performance leaving an indelible impression on me.

She has supported the Company’s work over the years, our hearts always beating faster whenever she was in the audience – an astute, honest, objective and intelligent critic. The last time I had a conversation with her was in Pontio earlier this year, keen to know what our plans and ambitions were for the future, and the ‘why’ and ‘how’ central to her thinking about the theatre in Wales.

We are forever indebted for your vision, inspiration and support – thank you.

Iola was a rebel. A woman who ‘cared’ a great deal, especially about the Welsh language, about theatre and politics, and with her sharp mind and unique sense of humour was in her element stimulating all kinds of discussions.

She went to jail for her second language about which she was passionate, and was one of the founder members of the pioneering Bara Caws theatre company with its aim of changing things in Wales. They offered an exciting programme of work which challenged the status quo, ensuring that Welsh theatre became more relevant to the lives of the people of Gwynedd and beyond, and central to all this was Iola’s unforgettable performances and her ingenuity as an author and director. She was in her element discussing ideas, and always had something unexpected to throw into the arena in order to challenge and create dialogue which could escalate at times to a fierce debate, but always with a positive and engaging energy. With her analytical, keen mind she always questioned everything to try to understand the weird complexities of the world we live in, so that she could identify with and support people who held such differing views. Thank you for being a friend who was second to none, an inspiration and great fun – it’s been a privilege! The world nor Wales will ever be the same without a rebel which enriched so many lives. Thanks Iola.

I first saw Iola when I was a student at Aberystwyth in the late sixties. She was standing there outside Cymdeithas yr Iaith’s annual conference in Neuadd Talybont, distributing pamphlets, in a white T-shirt emblazoned with the dragon’s red tongue. She was confident, defiant…and beautiful! A girl with fire in her soul – like her mother, the militant Welsh language activist, Mrs. Millicent Gregory.

Some years later, when she’d already embarked on her career as an actor, I came across her in the North – and I don’t mean North Wales. Val and Sharon, Gwyn Parry, Grey and I were devising a new piece for Theatr Antur, a special project for actors within Cwmni Theatr Cymru, the only professional Welsh language theatre company in those days. At the same time another show, IFAS Y TRYC with Stewart Jones, was being produced by the Cwmni, and in that particular production, who happened to be cast as a sexy artist type but Iola! I remember both productions rehearsing at the same time in York of all places – because yet another production by Cwmni Theatr, UNDER MILK WOOD, was being presented in the Yorkshire Playhouse, and as some of the actors were taking part in more than one production, we all stayed at the same hotel in the old historical North. It was as if the Welsh theatre, in its entirety, had moved to York! We had a great time…

Iola soon found herself an integral part of the North Wales theatre scene, especially, with the same Theatr Antur, under the wing of Cwmni Theatr Cymru, in CYMERWCH BWYTEWCH. This is significant as it was from among the personalities of this particular group of actors that the idea of Theatr Bara Caws was born. So in 1977 Iola, Val, Sharon, Catrin and I met to discuss the possibility of establishing an independent community theatre company which would challenge the theatrical establishment – which really needed challenging. On the whole the plays being produced were safe and stale, irrelevant to a large part of the audience. Of course, it was one thing to argue and make big plans in Bangor’s Globe Inn on a Friday night, doing something about it was quite another. But, damn it all, we’d promised Wil Morgan a show in Theatr Clwyd during the Eisteddfod in Wrecsam, and now we had to write the bloody thing…

And so, our small gang – which soon grew in number as Mari Gwilym, Dyfed Tomos, Bethan Meils, Dafydd Pierce, and the late Stewart Jones joined us – met in the old St. Paul’s School, Bangor, drinking tea and looking desperately at each other for ideas. Of course, we had no doubt as to the subject of the piece. It screamed at us interminably every single day and night via the press and media – the Queen’s Jubilee. “ God Save the Queen”, sang the Sex Pistols. But in our Welsh punkish production, who was to play the crucial rôle of the Queen herself? All eyes turned to the most regal, most straight-backed and most aristocratic-looking of us all…Iola! In the Queen’s entrance scene, Dyfed, playing the outrageous multi-lingual mis-mutating Equerry, provided a huge build-up ending with, “Oh Yes, the The Queen’s coooooooommmmmiiiiing!”, on which cue Iola, with a plastic crown balanced on her head, stepped slowly and authoritatively on to the stage, gave the audience an extremely long and sour look, before sitting delicately on a white fur-covered toilet seat to the accompaniment of words nabbed from the Eisteddfodic bardic ceremony, “Eistedded y Cwîn yn hedd y Cantîn” (“May the Queen sit in the peace of the Canteen). The moment always brought the house down. Some still treasure it as if it were yesterday…

Iola proceeded to make a huge contribution to the early productions of Bara Caws. She had a particularly fine talent for creating strong, believable and entertaining characters on stage – from the Iron Witch (Bara Caws’ version of Mrs. Thatcher) to the Methodist woman whose faith was shaken during a storm on board ship in HWYLIAU’N CODI. In the same production, Iola’s range of acting was displayed admirably. While her caricature of Brittania was satirically arrogant, later in the show she gave a touching portrayal of an ordinary sailor’s wife, who, while receiving the tragic news of her husband’s death at sea, had to cope at the same time with her confused chatterbox of a mother. A heart-breaking, comic/tragic scene acted and written by our two main actresses, Iola and Val, in what was, in my opinion, one of early Bara Caws’s best productions.

And now that Iola – our queen and commoner, our passionate, intelligent, talented, entertaining and generous friend – now that she’s left us, through our tears, we celebrate and remember her invaluable legacy to the theatre and to Wales.

I had the privilege of acting alongside Iola on many occasions, on stage and on screen, and was always in awe of her exceptional talent. But what I will remember most about her is her lovely smile and her mischievous, infectious laugh.

Iola was one of the cornerstones of the Theatre in Wales. Her contribution towards establishing a strong foundation for the craft and growth of the Welsh theatre in the seventies was invaluable. She was Welsh to the very core of her being, and a spokesperson for justice and equality in areas and for causes of all kinds. She was an enthusiastic theatre-goer until the end, even when she wasn’t strong enough to tour herself. We all knew whether or not Iola was pleased, and whether or not we’d done a good job! Thanks for all your support Iola…’Good Night’.

Over forty years have passed since Iola and I spent an afternoon together one grey February day in the Ceffyl Du, Carmarthen. We’d had to cancel our evening’s performance due to the lack of an audience. But over a pint, Iola mentioned the exciting plans of a group of actors who wished to form a new, innovative and relevant theatre company… and to my great surprise asked me whether I’d like to be involved,  “Of course Iola…” – and so the great Bara Caws adventure was born… as well as a wonderful friendship which was to last a lifetime. I’ll miss you.

Iola … she was a very special person, and every time I think of her I always see her mischievous smile.  I have very fond memories of the time I came to know Iola, Val, Dyfan, Catrin, and Mei for the first time.  I’d worked with them when I was with Cwmni Theatr Cymru before they established Bara Caws, and before I began working with the company in the eighties. It was always a pleasure talking to her, as well as great fun.  I admired her strong views and opinions, and she would always make perfectly clear what was on her mind. We had a lot of fun when our children were younger, going on trips to the sea-side and so on – happy days.  We were also more than welcome in Llandwrog at all times. She was an exceptionally talented person and I loved watching her on stage – she made a great impression on me in Merched yn Bennaf and O Syr Mynte Hi.  It was also lovely to work with her years later when she returned to Bara Caws to direct Paris.

I’ll miss you Iola – thanks for the privilege of knowing you and to have such a great deal of fun in your company – sleep well.  Our heartfelt condolences to Angharad and Rhian and their families. 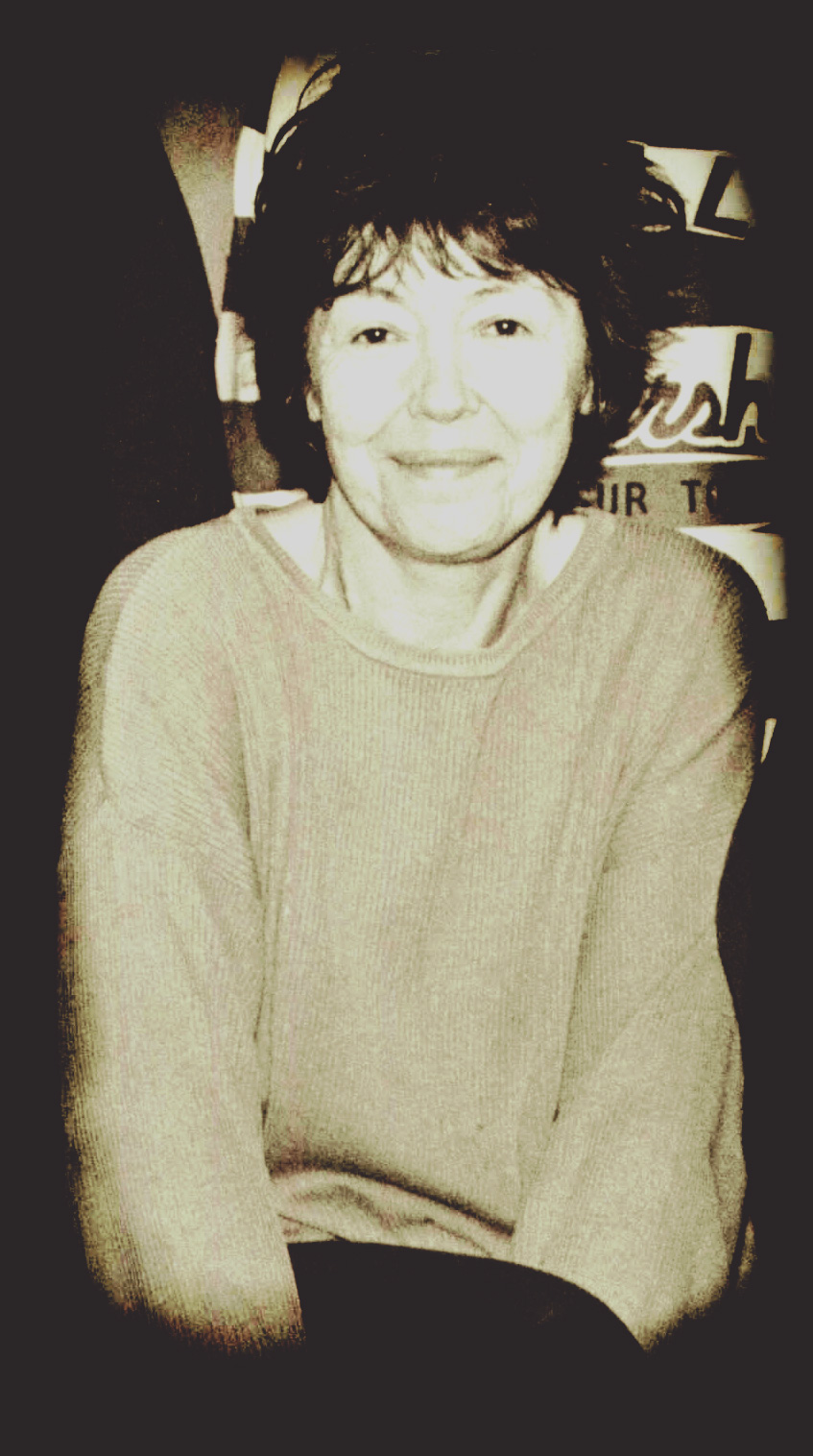 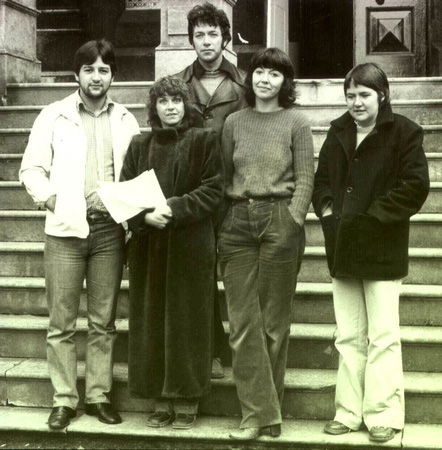